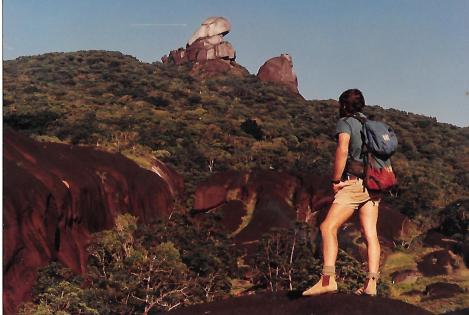 I recently realised that this 3-4 day walk is one which deserves to be recorded although it is definitely one for the hyper fit and competent navigators among you. Alison and I walked this in the mid 90’s in training for an extended walk in SW Tasmania, and I went again later as a guide for a police search party. It is mostly through untracked wet tropical rainforest, and includes three rock ascents with significant exposure. Several people have become lost in the hills west of Cape Tribulation, one permanently, so ensure that you have backup, even if it is simply a PLB.

The Roaring Meg Falls and Pieter Botte are sacred sites for the local indigenous women and should be treated respectfully. Jabalbina Land Trust in partnership with National Parks now manage much of this area and debate is ongoing about management of people moving through on foot and in 4wds.

Only the photos from the Pieter Botte area have survived, and the ones included here are from several trips.

Satellite image showing the start of the zigzag track.

We started from the Cape Tribulation to Bloomfield road about 1 km south of the Bloomfield river crossing. The Zig Zag track climbs steeply to a locked gate limiting vehicle access near the rim of the escarpment at 200m. The 4wd track then levels out and meanders about 7 km through Dawnvale Station to the Roaring Meg river and a ford. A plaque here commemorates the drowning of a teacher and his horse on his commute to school.  It’s only about knee deep during a dry season flow and fine to wade, although boulders make it a challenge for any 4wd. The tracks continue on the other side but from here we turned left and follow the right bank of the river. It is possible to stay on the 4wd tracks for a safer alternative to reach the falls.

After three km up the river valley, the walls started to close in and steepen so the need to escape before the cliffs closed in completely became obvious. We identified and followed a steep and exposed route up the right hand wall, following a fault line through to the car park by the top of the falls.

We stayed on the right bank, but from the car park, rough tracks go in all directions. We eventually ignored them and headed on into the forest following a line of least resistance along the river. It was slow going, scrambling up walls of boulders with wait a while canes and their thorny whips often falling on us without warning. Secateurs in a holster had already become a standard accessory. For several hundred meters we found ourselves walking along an aquaduct, dug a meter wide and a meter deep into the hill followed by a galvanised iron flume crossing a gully to the next hillside where the trench resumed. Trees 50 cm across were growing in the bottom, so it had been a while since water flowed. As we approached the river, the remains of rock walls were still standing where they had been built to divert water into the channel. We assumed that this had all been dug and built by the Chinese tin miners back in the 1930’s

After taking an hour or so for the first kilometer from the falls, we were worried about the next 12 kilometers to regain a walking track below Mt Sorrow, but the valley opened up and flattened out as we approached Duncan’s Flat, and the walking became easier despite the ploughed ground from the high level of pig activity.

A few kilometers before Duncan’s Flat, the river did a wide sweep to the north, so from that point we took a compass bearing to the ridge we were hoping to climb. As we started out on this shortcut it became apparent that we were walking through a tunnel, with a clear line of sight through the forest. Later on, the low light of evening revealed that we were following a depression of compacted ground across Duncan’s Flat, we then noticed very old blazed trees and eroded creek banks along the route. We were following a pack horse trail from the 1930’s which had also taken the direct route to the same ridge. They were heading to and from Cowie Bay with supplies for the miners at China Camp and further west. We camped wondering about those people who had walked this in the past.

The following morning about 8 km upstream from Roaring Meg Falls we met the river again, now heading off to the south for its 360 degree sweep around the Pieter Botte massif. Our plan was to climb a gentle ridge which crossed the Pieter Botte range well north of the summit boulder fields, to put us back into the valley of the upper Meg, which we would then follow downstream to the campsite between Mt Sorrow and Pieter Botte.

We crossed the river on tree trunks as the fast flow and huge number of submerged logs made this crossing much more dangerous than the one lower down, and started to climb through open forest, again finding remnants of the pack horse trail. At the top, at 850m, the horse trail seemed to turn north, while we were now headed south. We had to drop to the Upper Meg and follow it as the flanks of Pieter Botte have many boulder fields and rock ribs blocking any progress. Along the creek, we were walking in waist high fern interlaced with canes, so it was very slow going for about 3 km to the campsite.

The Upper Meg campsite has space for a couple of tents beside wide expanses of bare rock, the stream flowing along narrow slots. Plastic ribbon trail markers head due west from here up to the southern summit of Pieter Botte as well as due east to the crossing of the main range north of Mt Sorrow. We camped here and the next morning took day packs up Pieter Botte for the morning before heading down past Mt Sorrow to Cape Tribulation. 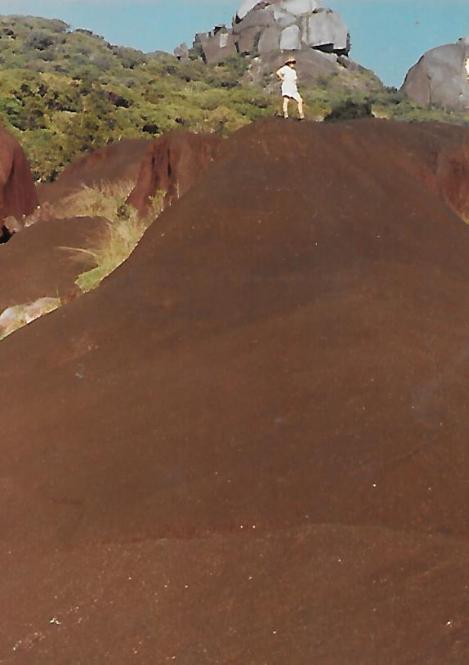 The climb initially negotiates a boulder field, with the trail seeming to go in circles to follow the line of least resistance, but it eventually emerges at the foot of a bare rock rib allowing access west but blocking any movement north or south. We climbed up trusting on friction and ensuring that we stayed on bare rock as the few plants that survive on here are already under enough pressure without our boots adding to their problems. From the top of the rib the route steepens beyond walking in places. We were hanging off trees roots and looking for footholds to gain height. The marked route finishes on the saddle between the north and south summits of Pieter Botte, with a final 100m exposed rock scramble requiring both hands to gain the top of the north peak. The south peak cannot be summited, although with significant scrambling it is possible to reach a plateau 20m or so below the peak. 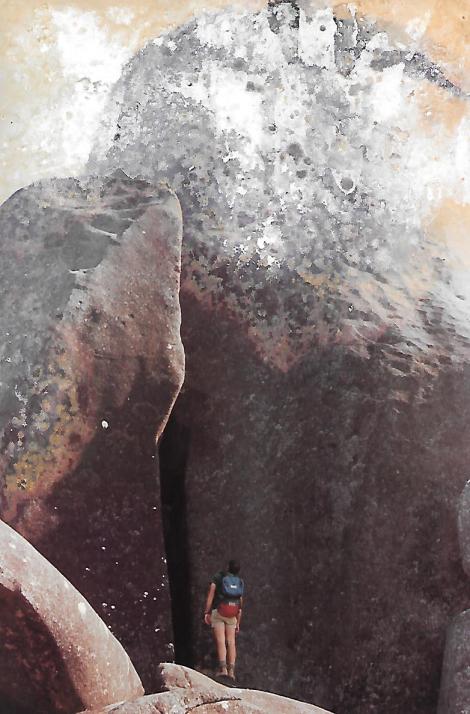 Southern summit block. The gendarme on my left rocked when I sat on top.

From the north peak, the main summit boulder looms well overhead and because of the cloud movement appears to be falling as you watch. The view to the north is of the green sea of trackless rainforest that we had just come through. 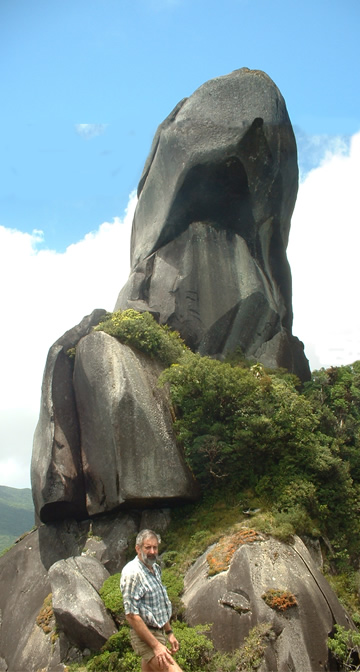 A well-earned lunch on top and down we go back to the Meg camp and pack for the 4 hour return to Cape Trib. First we had to climb the main range through another boulder field that required pack hauling, crawling through crevices, ducking under house size lumps and balancing along knife edges. There must be an easier way but I haven’t yet found it.

We passed Mt Sorrow, 2 km off to the south, and head on along a razor backed ridge to the National Park lookout, ducking around the warning signs placed to try and stop wandering backpackers who want to go just that bit further.

From the lookout, a real footpath is available for the next 700m of descent. Despite the pathway, it is with quivering knees we finally emerged into our backyard and home.