Adventure and thrills in white water, but is that why we’re here?
First Published by Earth Garden in about 1990.
Alison Gotts,
Cape Tribulation, Queensland

Walking the Durba Marg, the main street in Kathmandu, it becomes obvious that rafting package tours are booming in this Himalayan Kingdom. Posters, which show raging rivers, swamped rubber rafts and Himalayan gorges, plaster shop fronts for several blocks. There is a smorgasbord of trips, ranging from 3 days to three weeks, from gentle paddling to adrenalin charged fury and costs begin at US$50 per day all inclusive. (Note that prices remain about the same in 2017).

My trip had been booked before leaving Australia: three weeks in Nepal with a little trekking, a little rafting and a visit to the Chitwan National Park. A little rafting turned out to be a three day trip floating down the Trisuli River from Beni Ghat to Naringhat – a trip for novices with perhaps five rapids of medium difficulty over its entire length.

My group arrived in Beni Ghat, elated after eight days of trekking in the Pokhara region and excited by the prospect of three days rafting. Beni Ghat, a small village between the highway and the river owed its existence to the passing trade and the swinging footbridge which crossed the Trisuli at this point. The rafting crew waited expectantly on the riverflats below the village, where our camp had already been set up.

We changed into bathers and boarded the mini-bus to travel upstream to the rafts. This was a spectacle in itself – people emerged from the surrounding shops to see us off, jostling for a good position, curious and possibly offended by the existence of so much flabby white flesh exposed in one place at one time.  Thank goodness I had not brought bikinis. Our departure probably provided hours of gossip for the villagers, until out memory and shortcomings would be replaced by the next group.

Our rafting leader was called Mongul.  Mongul turned out to be the Nepalese version of the ubiquitous beach boy corrupted by Western culture: he had sunglasses, a very brief swimsuit, lots of sexual charisma and punctuated each sentence with “Hey man”.  As we discovered later, he considered this trip beneath his dignity – he was a skilled boatman and had played a star role in a film documentary featuring the fiery Sun Kosi river.  His conversation was prefaced by remarks such as,  “these rapids are nothing compared to the Sun Kosi”,  or  “you think this water is cold, you should feel the Sun Kosi”.  Nothing, but nothing on the Trisuli could measure up to the Sun Kosi – the weather, the scenery, the people, the food.  I made a firm resolution to avoid the Sun Kosi. 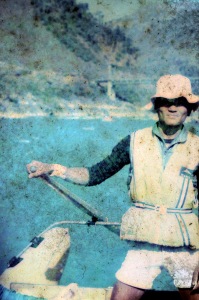 We received a quick lesson on how to paddle and then took to the rafts.  These rafts had an interesting variation to the rafts I had used in Australia, they had a large rudder trailing behind the boat.  The helmsman was able to steer from the back of the boat, standing up, using the same principle as the tiller on an outboard, but rather slower to respond.  All we had to do was paddle.  At first I was rather puzzled – how would this rudder perform in rapids?  Surely the rocks would limit the sweep of the rudder and reduce the rafts maneuverability.  Once through the first rapid, drenched by the pressure waves, I understood. There were no rocks, only water, and the rudder was used deliberately to steer us into them sideways, to give us a thrill.

Nothing in the glossy brochures, studied from the warmth of an Australian summer could prepare us for the chill of the winter water in a Himalayan river.  Wet and dripping, we froze.  Our raft quickly came to an understanding with the helmsman to keep us as dry as possible, please, and we’ll skip the thrills.

The only people to remain dry were the helmsmen at the back of the boats – standing and controlling, they were able to escape the worst of it.  The campsite came into view and the vision of warm dry clothes was overpowering.  A mood of madness took hold of the party: a water fight began with those who were already wet through, trying to drench those who weren’t.  The rafts were dragged under and the helmsmen ducked with much horseplay and shrieking.  The only person to escape was Mongul, who maintained his ferocious dignity, and eluded us with his superior paddling.  During the melee, I happened to look up.  Directly overhead, the swinging bridge was crammed with spectators – the entire village of Beni Ghat.  Several hundred people seemed to be on the bridge silently watching.

People left the water to change into dry clothes in the privacy of the tents, away from those eyes.  The tents were comfortable but the patched knife slashes in the tent walls made us feel uncomfortable.  In nights past, these slashes had given access to groping hands and this evidence prompted us to sleep with our valuables inside the sleeping bags.

Next morning, our personal luggage was loaded onto the rafts, but the tents, food and other equipment went by road. To our amazement, the support vehicle turned out to be the public bus.  The rafting crew would stand by the side of the road with the mountain of gear and wait until a bus appeared and then flag it down, load all the equipment and climb aboard.  These buses are normally so full that the only space left is on the roof, and even this may be crowded.

The road hugged the river, winding through valleys and spurs, hundreds of meters above the river, an engineering feat accomplished with Chinese aid.  Buses had been known to plunge over the edge, killing 90 people at a time plus an assortment of chickens and goats.  When our gear actually arrived at the next campsite unscathed, it seemed a miracle.  It was difficult for  Westerner to accept such a low technology solution to the luggage problem.

The actual trip had several highlights.  The rapids themselves were small and the many stretches of flat water made paddling a lot of effort, but the journey provided some interesting experiences and much food for thought.  Generally the landscape was rugged, the river passing through steep sided gorges covered with dense vegetation giving the impression of untouched wilderness. Yet, whenever we stopped people just seemed to arrive from nowhere to watch us and sometimes wave.

On one sandbank, three elderly men were carving a dugout canoe from a very large tree trunk, using simple implements – a very time consuming and painstaking task.  If too much wood was shaved off, the whole effort was wasted as a boat with a hole in the bottom was difficult to repair.  The sandbank was covered in woodchips.  After each stroke, they knocked the bottom carefully, using their ear to gauge its thickness.  These men barely acknowledged our presence as we moored our rafts for a closer inspection.  They had another weeks work and didn’t have time to waste talking to inquisitive tourists. I wondered how many other rafting parties they had already experienced.

These dugout canoes were a common form of river transport on the Trisuli.  A ten year old boy was providing a ferry service for the local inhabitants to cross the river.  For the equivalent price of ten cents, he poled people, goats, sacks of rice and other produce across the river, and while we watched, business was booming.  His technique was to push out into the fast current and use the pole to ferry glide and steer but never to row, letting the current do the work.

On the third day we stopped at a temple where a renowned religious recluse ‘Çrazy Baba’ lived a very simple lifestyle.  Tremendously large, with his skin hanging in folds across his body, and wearing only a g-string, he accepted our homage with great showmanship, and sensing our curiosity presented his left arm for inspection.  This was a stump which terminated above the elbow.  The rafting crew explained the deformity with the story that each year Crazy Baba made an act of sacrifice to his god: a slice of his arm. 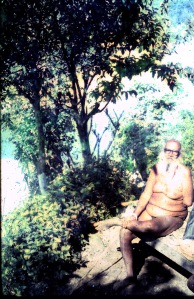 End of the Trisuli trip

The rafting finished on the Terai, the large open plains at the foot of the Himalayas which extend into India.  Hundreds of Indians gathered to watch as the rafting crews sought their revenge and dunked all the tourists.  We waded ashore, wet, cold and bedraggled, only to discover that there was nowhere to change out of our wet clothes in privacy.  The choice was to change under a towel, or stay wet to travel to our next destination, the Chitwan National Park, more than an hour away.

If you intend to go rafting in Nepal, and have never rafted before, then a trip down the Trisuli is worth considering, but try to avoid the winter months because the water is freezing.  Get used to the idea that you will be soaked through most of the time, something the brochures never tell you.  If you are an experienced rafter I would suggest that you try the Sun Kosi, (On Mongul’s recommendation) because you will be disappointed by the flat water of the Trisuli.

Rafting does provide some interesting experiences which you would not have if you traveled this same stretch by road.  However most of your interaction will be with the rafting crew – the rafts set you apart from the local villagers.  Whenever a Westerner travels in Nepal, the locals will be curious: trekking provides an opportunity to meet them as fellow travelers, while rafting is a Western cultural thrill which is alien to the Nepalese.

Compared to the elation of trekking in Nepal, rafting made me feel deeply embarrassed as I perceived myself through Nepalese eyes, as the rich Westerner having her thrills, while they continued with their daily tasks of survival.