I did this Spanish walk and pilgrimage alone in March/April 2001. At the end of the journey I sent this short version to family and friends for a taste of the Camino experience. 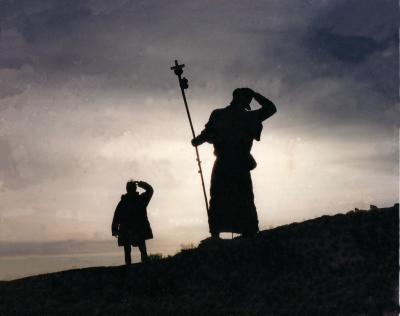 I have arrived in Santiago, in northern Spain, after walking the Camino – over 700 kms in 27 days,walking between 20 – 35 kms each day. I have walked through snow storms, hail storms, had winds so strong it was not possible to walk vertically and I have suffered from sun burned lips and knees. I have verged from hypothermia to heatstroke.

Every morning I wake up at 7.30, pack my muchilar (backpack) and start walking about 8.00 AM. I stop and have breakfast in a bar – a coffee and a Danish or bread and jam- if there is a bar and if its open. During March there were some days I walked without food, just because there was nowhere to buy it in the villages I passed through. Every day would be a new day with whole set of memories. The early days focused on coping with the pain of the blisters underneath the balls of both feet, the heels and the toes. I learned that once you start walking, it goes numb and you can cover large distances as longs you don’t stop often and restart – that’s when the pain returns.

I also had to learn to cope with the solitude. In the first two weeks I only saw a handful of other pilgrims, and often at night I was the only pilgrim at the refuge. I have learned about humility from the Spanish people who have tended my blisters, warmed me up, given me food, encouraged me to go on and whenever I lost the trail, they magically appeared to give directions, This is the spirit of the Camino and it came as a complete surprise to me. I just thought I was doing a long distance walk but the Spanish people have the Camino embedded in their history and heart, and give respect and support to pilgrims as they pass through their villages. I have developed a different set of priorities – centred on the basics of survival, and I have enjoyed being able to place everything else out of my mind. I have had one goal for the last month, and each day I have moved a little closer to reaching it.

I have walked from the Pyranees down into the olive groves, the vineyards and the wheat fields, up onto the meseta – the high barren plains and through the mountains of Galicia. I have seen spring bringing changes over the four weeks, as the fruit trees start to flower and the Spanish people start to prepare their fields for planting. At times I felt I was in Europe 50 years ago – the donkey and the oxen pulling the carts and plough, the shepherds with the sheep, old women collecting firewood. The main thing I will remember will be the day-to-day interactions along the way with the local people.

In the last two weeks of the walk I walked with other pilgrims and started to care about them. When I lost my Maui crocheted sunhat, Jo the Canadian offers me his scarf, and as I wear it I slip into the role of Spanish grandmother and peasant, and it seems to fit and I feel comfortable, even though I don’t recognise myself in the mirror. One afternoon lying on the path exhausted, a Spanish pilgrim appears and says ‘I will help you, it is easier walking if there are two’ and he got me through the last four kilometres to the refuge.

The welcomes by the hospitaleros have been really special. They have made me a cup of tea, carried my pack upstairs, and checked all is OK. I have met and walked with so many different nationalities – Mexican, Canadian, Belgian, Spanish, and the friendships have been really open – there is no bullshit on the Camino.

Walking alone has been wonderful – I think people reach out to you, and you are more approachable. My main recommendation would be to walk alone, if you are thinking of doing it and avoiding the peak season, with all the large groups and the crowds in the refuges. My experience was solitary – it gave me a lot of time to think about my priorities and life in general – and to appreciate the companionship on the path.

Do you want to read the full account? It is called Camino de Santiago – Unabridged.